Jerusalem24 – A group of Israeli settlers took over a Palestinian house near Qaitoun mosque in the old city of Hebron this morning.

Imad Hamdan, director general of the Hebron Reconstruction Committee, told WAFA that settlers occupied the house of Abd al-Karim Ajriwi in the Qaitoun neighborhood, opposite the Sultan’s Pool and the Ibrahimi Mosque, after they installed metal stairs under the protection of  Israeli forces.

Hamdan pointed out that the Israeli forces detained Hassan Al-Salameen, a field researcher in the Hebron Reconstruction Committee, while he was documenting the violations of the settlers and Israeli forces in the area. Al-Salameen was later released.

In a recent interview with “Felesteen”, Saeed Bisharat, a specialist in Israeli affairs, said, ” Settlements in Hebron are based on reinforcing the idea of ​​the occupation to confirm its religious theory related to the city, and to consolidate its control over the Ibrahimi Mosque. The city has the Kiryat Arba and Gush Etzion settlements, and they also buy homes.”

Around 700 Israeli settlers live in settlements in the heart of Hebron, where they are guarded by thousands of Israeli soldiers and police. Hundreds of Palestinian homes have meanwhile been left empty due to restrictions favoring settlers.

Settlement watchdog Peace Now said that “it doesn’t matter if [the building] was legally purchased” by the settlers, but rather if Defence Minister Benny Gantz authorized their entry, according to the Jerusalem Post.

Alshaer is a Palestinian journalist, a Birzeit University graduate with a B.A. in TV and Radio Broadcasting Journalism. Alshaer has 5+ years of experience in journalism. She currently works as a reporter, editor and presenter/producer for PBC-Palestine TV and Jerusalem24 radio. She’s a UN and Kelley School of Business alumna.

Officials worldwide call for investigation into killing of journalist 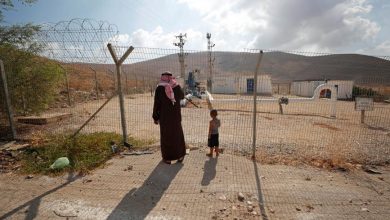 Pumping water in Bardala: A game of cat and mouse