Jerusalem24 – Today, Thursday, a general strike took place in the cities of Bethlehem, Beit Jala, Beit Sahour, and the neighboring villages and refugee camps, to mourn the death of released detainee Hussein Al-Masalmeh.

Shops closed their doors, students were absent from their schools, and various institutions were closed.

A massive march took place late last night into the early hours of the morning in the Dheisheh refugee camp, and the demonstrators roamed the various streets leading to the martyr’s house in the town of Al-Khader, and the demonstrators chanted Palestinian national slogans calling for confronting the Israeli occupation measures against the prisoners. The demonstrators called for serious work to release them.

Al-Masalmeh’s funeral is scheduled to take place this afternoon, the procession will start from the Beit Jala Governmental Hospital in a military funeral to his home in the town of Al-Khader. Then he will be “the cemetery of the martyrs” in the Dheisheh Refugee Camp.

The Israeli forces arrested Masalmeh and sentenced him to 20 years in prison, of which he spent 19 years, on charges of belonging to the Al-Aqsa Martyrs Brigades the military wing of Fatah movement. He was diagnosed with cancer and his health deteriorated seriously, forcing the Israeli authorities to release him last February after the intervention of many parties.

Al-Masalmeh’s release was conditional on preventing him from entering the Palestinian Authority areas. He received treatment at Sha’arei Tzedek Hospital, and then at Hadassah Hospital. As his health deteriorated, he was allowed to be transferred to the Istishari Hospital in Ramallah about a week ago, where his death was announced. 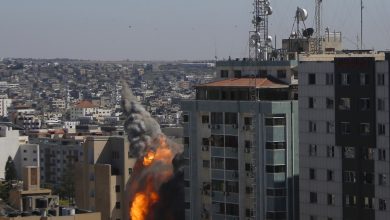 More than 50 strikes on Gaza