Tamer Nafar, a Palestinian rapper from Al-lod, opened-up in his latest interview with 24FM, about the most repeated and annoying question he receives during interviews with the international media by saying, “Two words, I hear them in each interview: Do you condemn? As they compare the violence of an oppressor with the violence of the oppressed.” For Tamer, violence is the last thing Palestinians want to see, they want a normal life, a happy life, but they have been repressed for over 70 years and it’s normal to resist and react.

Tamer is not the only one who faces these questions; the international media repeatedly tries to get condemnations from Palestinian politicians and figures over the latest Hamas rockets towards Israel.

In an interview with BBC, the head of Palestinian Mission to the UK, Husam Zomlot, replied firmly to the host’s question, “Do you condemn the rocket attacks by Hamas?“.

Mohammed El-Kurd, a Palestinian writer from Sheikh Jarrah, forcibly lost half of his family’s house to settlers’ organizations in November 2008. Now, his family are living under even greater distress by being completely displaced from the neighborhood forever. In an interview with CNN, El-Kurd could not digest the broadcaster’s question when she asked him, “Do you support the protests, the violent protests that have erupted in solidarity with you and other families in your position right now?”

Mohammed replied, “Do you support the violent dispossession of me and my family?”.

Mohammed tweeted this moment simply with the caption “Anyway”. 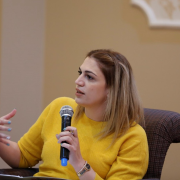 People of Silwan holding onto their homes