Jerusalem24 – Last night Tuesday, the Israeli under cover unit also called the “Mustaravim” arrested a member of Fatah – Jerusalem Region, Yasser Darwish, while he was in Beit Hanina, North of Jerusalem. Eyewitnesses stated that Mustaravim, who were in civilian clothes, kidnapped Yasser Darwish from his car while he was in Beit Hanina, and took him to an unknown location.

Darwish who is from the village of Issawiya was arrested several times, and decisions were issued against him to be deported from Al-Aqsa Mosque as well as the the village where he lives.

Issawiya, a town outside of Jerusalem has been the scene of several arrests and violent confrontations in recent weeks. The Israeli forces arrested 3 young men from the village of Al-Issawiya today, after storming their homes, and they are: Muhammad Ibrahim Ubaid, Reda Ubaid, Tariq Musa Ubaid. Wake Up Palestine – Life in Jerusalem if… 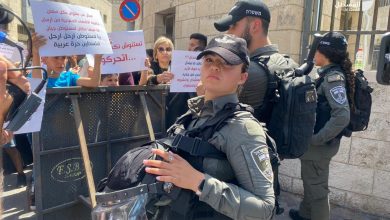