Jerusalem24 – The Palestinian Prisoners’ Information Office announced today in a statement that many detainees in Section 12 of Nafha Prison had suffered injuries and were denied any medical treatment until now.

The injuries that the detainees are suffering from include a cracked skull, a broken nose and broken ribs and others.

Nahed Al-Fakhoury, the Director of the Office said in a press statement that all the prisoners of Section 12 in Nafha Prison were subjected to physical assault by the guards working for the Israeli Prison Service.

He also pointed out that the Prisons Service isolated the detainees away from any surveillance cameras to hide the extent of the attacks and to prevent any images of the attacks from being leaked.

Al-Fakhoury also said that the assault was done by dragging the detainees and beating them, releasing police dogs on them and even throwing them down stairs while their hands are tied behind their backs.

The Director of the Prisoners’ Information Office indicated that he has found out the nature of some of the injuries and who has been injured. Khaled Abu Judeh was injured in his right eye, and Ziad Awad suffered injuries in the face after being attacked by police dogs, Ihab Sa’ad suffered a broken nose, Jihad Jarrar suffered a fracture in one of his ribs, Fadi Abu Al-Sabbah sustained a broken nose and a platinum implant shifted its position necessitating his need for urgent surgery.  While Obeida Al-Barghouthi has a broken kneecap and needs immediate treatment.

Weather forecast: Temperatures on the rise 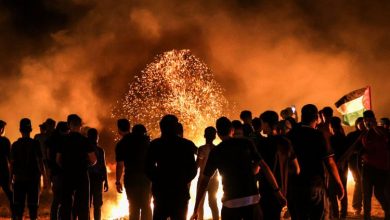 Social networks are back in operation after hours of outage